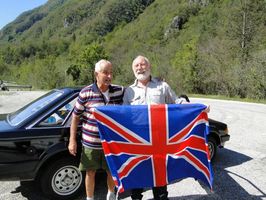 Giuseppe knows how to greet a Brit !
Easy drive to the Italian border at where we were stopped by Border Police. They were actually quite fun and we had a nice chat.
Giuseppe and Fabio arrived with Union Jack flying. After a jolly meeting they took us to eat some delicious ice cream cream. At their home we met Loris and Andrea. Loris is a great cook. After the meal Giuseppe and Fabio took us out to see the coast at Grado. A very modern and attractive city with some good ancient ruins as well.
Back for yet another meal prepared by Loris. 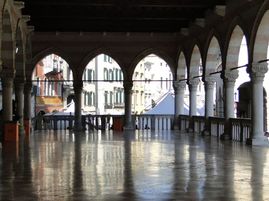 Udine's beautiful old market
Giuseppe and Fabio took us for a walk around Udine festival. Udine is a really nice small town with quite a lot to see. Around lunchtime we had a local speciality of cheese and potato mixed, even mashed, in a frying pan until it has a crust. Very tasty.
Out to Aquileia which are the remains of a Roman port. There is a very beautiful church with amazing mosaic floors. Next door is a very tall bell tower, which we had to climb of course. The result was very clear views of the flat lands of the area. From there Giuseppe drove us to Palmanova to see castle walls. This is a star castle and the fortifications are fantastic. When Giuseppe took us inside the fort to see the town I was expecting more archeological ruins. The surprise was to find a real living town with a very large central square. A wonderful day out, made even better when we got home to the real Italian food prepared by Loris. 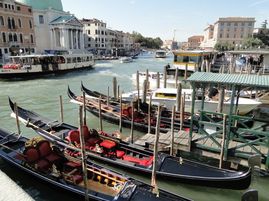 Venice. It really is amazing.
It is just a short walk from Giuseppe’s house to the station. Judit and I took the train to Venice. It is a 2 hour journey and costs €20 each for a return ticket. But local knowledge told us that to take a vehicle is crazy and even more expensive.  Read a guide book about Venice because my words cannot do the place justice. Narrow streets ending at a canal with a gondola drifting past. Turn another corner and you are in the magnificent St Mark’s Square. We took 120 photos, but a thousand would not be enough. 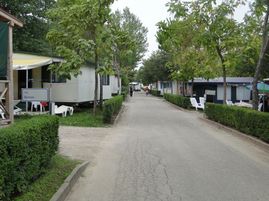 Bella Italia giant campsite.
Sadly we had to leave Giuseppe, Loris, Andrea and Fabio. They have been such generous and hospitable hosts. Giuseppe even led the way for us to the outskirts of Udine and pointed us the right direction.
Avoiding motorways and other paying roads we had a very peaceful journey through the NorthEast of Italy. Many enormous vineyards. But after that we encountered the built up areas of Treviso, Vicenza and Verona. Lots of traffic lights and slow moving traffic. Eventually we found ourselves in the area of Lake Garda. It’s really a sort of middle-class seaside resort with wonderful scenery. The first place we tried to camp in was big; really big. They wanted €20 a night plus €4 an hour for WiFi. No thanks.
We drove to the southern end of the lake thinking it would be quieter. No. But we stopped at Camp Bella Italia. They wanted €16 for the night but all plots were full, so we ended up in the sports field. Not bad but not too level. At least we have electricity in the price.
However WiFi is a different matter€3 for one hour and only €15 for 5 hours. We did not bother, but pointed out the error of their ways.
The camp is enormous. There are 41 rows of plots from the road to the lake, and 60 plots across. The plots are made up of brick-built bungalows, mobile homes, tents and caravan/motorhome pitches. There is everything for everyone who loves Butlins and Pontins, shops, pools, bars, restaurants, discos, pizza parlours, etc. But there is free swimming in the lake! 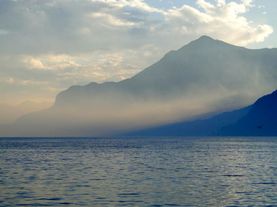 The day started gloomy and carried on until evening with showers thrown in at irregular intervals. Our journey took us across northern Italy. Almost the whole journey was spent passing through industrial areas with hundreds of roundabouts.
One highlight was a visit to Interspar. What an amazing selection of quality food.
As we approached Lake Como, expecting stunning views we were thrust into several tunnels as long as 2 kilometers. Luckily we had installed Archie’s Camping and ACSI coordinates so had little trouble find a camping spot. What a gem we found in Dervio; Camping Europa. A friendly host called Patricia welcomed us and took us to the small area available for travellers. The rest of the camp consisted of static vans. Our pitch was on the water front. Free WiFi in the coffee shop and free electricity. €20 for one night. The views were outstanding.
Before dinner we had a meander round the town and found we were camped next to a shipyard repairing a paddle wheel ferry. Not far away was a hard working steel rolling mill. They had massive ingots of various steels outside including stainless. Too heavy to lift!