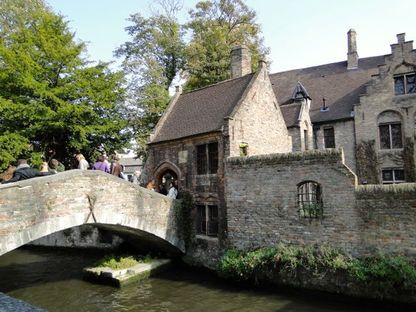 A bridge in Brugge.
29 September 2013
There’s a nice Aire in Brugge but it costs €22.50 a night. You have to take a ticket to lift the barrier.
Despite lots of renovation in the 19th Century Brugge remains a very attractive city with canals, parks, narrow streets and lovely old medieval style buildings. Even in late September it was crowded with tourists. We visited the so-called oldest hospital in Europe and viewed paintings galore. On to the city centre, where there is a very large square called the Markt. Here it was clear that we were in a touristy area with sandwiches costing around €12 each. Don’t even think of having a few mussels and chips. Instead we went a few streets away and had a lumpia and friets for half the price. For those who don’t know, a lumpia is similar to a spring roll from the Chinese take-away... but bigger and containing real bits of chicken. Excellent.
After our snack we walked past the friets museum on our way to the chocolate museum; which turned out to be quite interesting. Belgium is famous for chocolate, but did you know that the first chocolate bar was invented in England by Mr Fry?
On our meander back to Bessy we visited the art museum which had a special event... the Pablo Picasso exhibition. Then back to Bessy.
We found it difficult to get out of the Aire. The idea is to enter your card and then your own plastic. That didn’t work but a couple of nice Nederlanders said to try to bus park across the road. There was a machine where you could enter your ticket, pay by plastic or cash, and get your ticket back. Then walk back to the Aire and enter the ticket to raise the barrier. Instructions could have been clearer in the original Flemish as well.
We took the non-motorway route to Dunkirk because we wanted to buy a few fags and get some cheap diesel. This we did. The lad in the baccy shop was a Pakistani from Manchester; how about that.
Once more we were back at Dunkirk, booked a ticket for morning and then went to the car park to bed down for the night. Around 20 motorhomes were parked up that night. 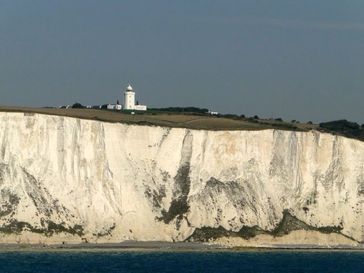 Excellent sight for the eyes on a beautiful day.
30 September 2013
Suffice to say, we had a lovely crossing, and English Breakfast, excellent weather and some lovely views of the Channel. Quick visit to Sainsburies and home to sort out paperwork, MOT and such like boring things.