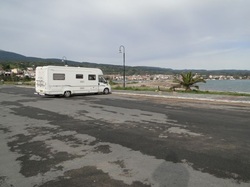 12 MARCH 2012
At last we made a decision to start our journey. It was not a good decision because the rain was absolutely bucketing down and it was very windy. In fact the weather forecast said there was snow in central Greece spreading all over.
However we made it to Petalidi and after various indecisions on the part of the co-pilot we parked up in a car park next to the harbour. Very peaceful and flat. But maybe not flat enough to let the fridge work on gas. We’ll have another go tomorrow.

Tuesday 13 March
We've had a busy day. After sleeping on the harbour car park at Petalidi we drove to Messini and did a bit of shopping at LIDL.  I must add that it poured down and blew a gale all night. Just across the road from LIDL is a Carrefour (French) supermarket where we picked up things that LIDL do not sell. For example lovely Greek pitta bread. It's not like the usual pitta bread in that it does not open up to make a pocket.
But LIDL had a special offer as they usually do. A 2-section fishing rod, with real and line and hooks and a spinner for €25. That's about 21 quid.
From there we drove to a store in Kalamata called IDEA. It's a strange place that's a sort of downmarket B&Q.  But we managed to find some wood glue and a small cooking pan. Our smallest pan was too big for a couple of boiled eggs and was wasting water. Now that we are really on the road every drop counts. That includes filling up the bog… it only has to be emptied! They had a special offer on; a hair drier called "Crappy". Really. The wood glue is to patch up a bit of laminate that's come off the edge of a drawer. We tried superglue but that didn't work.
After that we walked around and found a pharmacy that sold us more of our medicines (antihypertensives and cholesterol lowering drugs). It cost us €55. 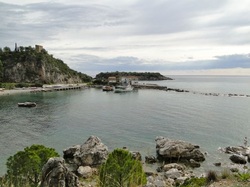 Kardamyli
From there we made our way south down the Mani peninsula. Fantastic road that twists and turns , climbs and descends for about one hour before arriving at Kardamyli. We stopped and walked to a small harbour to see if we could park there. Sadly not. But we were welcomed by 2 ducks that followed us. We eventually worked out that part of the harbour was their patch and we were to go away.
So a few Km further on we stopped at Agios Nikolaos, just South of Stoupa. It was a bit of a wiggly road from the main road. Then we had to drive along the sea front, dodging the tables and chairs set out for restaurants. After a couple of hundred meters there was a dirt car park where we have stopped for the night. Right on the sea shore. It's not raining.
A walk around took us past a few tavernas and bars still not ready for the tourist season. Near the centre of the village was Gregg's Bar that had a sign offering "Full English Breakfast". As it was 4-00 pm we did not ask for one. However we got a very warm welcome from the owner and his wife Freda. They were Greek South Africans. Clearly the place was the haunt of Brit ex-pats. But it was warm and friendly. Freda said we could go there and use their internet any time.
So if you get this email it's thanks to Freda at Gregg's Bar. I must add that I'm writing this in the evening ready to send when we get the connection. The mountainside from Kardamyli to Stoupa (that's as far as we've got) is littered with hundreds of new holiday homes and a new supermarket. Just a few year ago the hillside was empty except for a couple of villages. Now it's hard to tell what's what.

Wednesday 14 March 2012
A day for walking around the area. We even got as far as Trevor and Linda’s place in Riglia. They will be pleased to know that it looks fine, but the pool needs cleaning ! 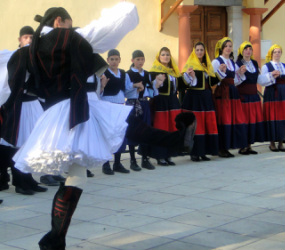 Dancers at the celebration
THURSDAY 15 MARCH 2012
We tried to find Nicky in Stoupa but had no luck. So a bit of shopping at a superb new Supermarket on the main road past Stoupa. Then we headed for Kardamyli for a walk around. We were lucky because the whole town was just about to start the parade and ceremonies to mark the repatriation from the Turks on 17 March 1821. We were told that the Greeks assembled at Kardamyli. Boys and girls dressed in traditional clothing, traditional music and so on with not a tourist in sight (except us of course). See the photos. 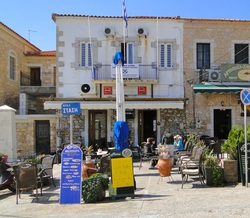 Gregg's Bar in Agios Nikolaos.
FRIDAY 16 MARCH 2012
We decided it was time to leave Agios Nikolaos and head off into the unknown. But first a trip to Gregg’s Bar to check on emails and other internet matters. For example Martina SKYPED us to say we had bits of post and what we had to do. Excellent service and very much appreciated.
While there we found that Gregg’s Bar did not have a website so we spent an hour making one for her.
The site is called, “http://greggsplateia.weebly.com”. It still needs text adding by Gregg and Freda but it’s a start. Our way of saying thanks for the service.
We had our first scratch today. Some prats parked in the exit of the car park and we had to squeeze between a car and a fishing boat. Sadly we tilted as we went up the slope of the exit and rubbed the rubber rubbing strake of the boat. We now have a lovely black mark down the side of Bessy. Only T-Cut will get it out. Best wait till back in the UK.
First stop was Aeriopolis where they were preparing for the celebrations to mark repatriation from the Turks in 1821. A fine lunch of souvlaki and chips in the eatery known to Pat and Mike.
The town car park was full of people having some sort of horse show. No idea what.
Onwards on an excellent road to Gythion Bay campsite. Pleasant spot but €2 dearer than Finikunda, the washing machines cost €2 more than Finikunda and the internet is not all that good.

Further down the Mani... 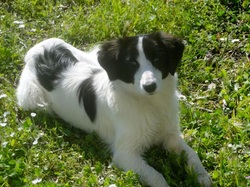 Speedy, one of the dogs at Gythion Bay Campsite.
Saturday, Sunday Monday 17,18,19 March 2012
Our stay was made more pleasant by meeting up with Viv and Alan, old friends of Barry and Margaret. Alan helped me to try and get the gas part of the fridge working, but no joy.
While walking to Post Office in Gythio on Monday we met Brian and Carol. We went as  a team in search of the amphitheatre. Small and next to Army Base.
We left Brian and Carol and visited the museum on the peninsula. 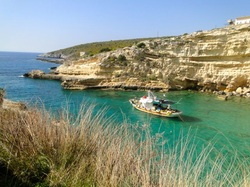 Mezapos harbour
Tuesday 20 March 2012
Left Gythion Bay and drove via Areopoli to Diros Cave. Fantastic boat journey underground with many formations to see. However it was at UK prices... €24. Probably because they had EU assistance.
Our next stop was a tiny village of 40 people, Mezapos. Very narrow streets ending at a paved car park where we stopped for the night.
Afternoon was spent watching a couple of guys messing around with a fishing boat and in the evening we went to a Taverna run by Stavros. The decor was early Formica (see photos). He had the most amazing wood burning stove in the middle of the floor. So much for Health and Safety and EU Directives.
We ate fish with a Greek salad and bread. The fish were tiny and we had 3 each. After removing the heads, fins and and bones there was very little left. Another €24. Fish is very expensive in Greece. 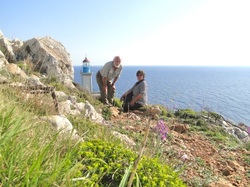 Proof we got to Cape Tenaro.
Wednesday 21 March
A delightful drive down the Mani. At a glance resembling the Highlands of Scotland, but the plant life is a give away. In about 20 Km we arrived at Kokkinogeia. That’s as far South East you can drive in Europe. The sign said no motorhomes or camping allowed in the car park. However the lady in the taverna just shrugged her shoulders and basically said “Get on with it.” So we stayed the night. But first a 2 hour walk over VERY rocky ground to the very end of Cape Matepan or Cape Tenaro (take your pick). From there we could see the ships passing the Cape. That’s probably why the area was famous for pirates.
However today the exciting part was warning Judit not to step backwards or she would have been bitten by an adder. Luckily she was OK probably because the adder had a mouthful of lizard. See photos. 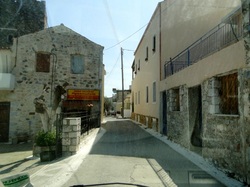 Narrow streets in Kotronas
Thursday 22 March 2012
On way to Kotronas called at Porto Kagio and had coffee. The waiter was an Afghan. Porto Kagio is in a delightful setting. Steep descent and drive across pebble beach for parking.
The road to Kotronas was twisty and narrow but worth it. We stopped the night on the quayside. No problems.

...a bit of the Third Finger 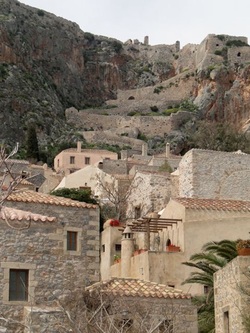 Monemvasia, on the Third Finger
Friday 23 March 2012
Drove to Third Finger of the Peloponnese and stopped at Monemvasia. The large rocky island resembles St Michael's Mount in some ways. The local town was not up to much but a large cruise ship was anchored just off. The island has a historic small town with narrow streets and tunnels. Very pleasant. Met another UK MH man called Tony from Liverpool. He is going clockwise around Greece while we seem to be going anti-clockwise.
From there headed to Boza for a Night Stop. However the SatNav was not up to it so we ended up in Plytra. A pleasant little fishing village probably used by Greek holidaymakers. Camped under Eucalyptus trees next to harbour. A very noticeable feature of the village is the wide roads. According to a local lady the streets were planned by a Belgian; the same man who planned the wide streets of Sparti.
During the night we were sleeping on a rough car park under the trees and a car sped up and screeched to a stop alongside us. It was the Police and they apprehended 2 illegals within 2 meters of the motorhome. What an exciting life we are having.