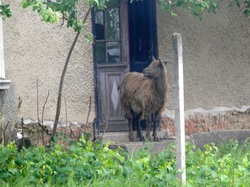 A Bulgarian goat.
Friday 4 May 2012
We left Kerkini after topping up the water and headed for the Bulgarian border. Quite painless but we had to pay €5 for using the roads which we in the west have already paid for. One of the ladies in the office was lying back on a settee smoking and asking me questions... interesting way for an official to behave!
As we were doing so well for time we decided not to stop at Rila monastery but plod on. Sofia has some new roads and some old signs. We missed the southern Ring Road and found ourselves heading for the Northern Ring. What a state the roads are in. Without exaggeration some of the potholes were the diameter and depth of a large washing up bowl. Distance between potholes about 3 meters.
Further north at Montana we fell foul of the bad signage and headed towards Vidin on the “B Road”, or Bloody Road as Ian calls it. Yet more potholes, but bigger and more of them. It looks like the Bulgarians build new roads with EU money (mine and yours) and then wait for more money to repair the old roads.
From Sofia to Vidin we suffered heavy thunderstorms and very dark skies. Quite a change from Greece. Distance about 275 miles on bad roads. 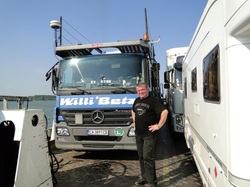 Very helpful Bulgarian trucker.
Saturday 6 May 2012
We spent the night in a Truck Stop not far from the Vidin/Calafat Ferry. Flat and guarded is the best description. While waiting for the ferry at Vidin Ian struck up a conversation with a German speaking Bulgarian Trucker. He turned out to be a great guy who put our mind at ease about certain Romanian roads.
He was 100% correct.The road from Calafat towards Timisoara is not like it was 3 years ago. It is perfect... really.
The ferry cost a fortune. €52 for the river crossing, plus €11 road tax, plus €5 local tax. We must remember that we have already paid for these roads when we dish out our money to Brussels. Any sensible EU Minister would have the charges removed or we build no more roads. EU incompetence and local thievery.
We made such good time on the excellent Romanian road that we had our next stop in Szeged, Hungary. Sziksós Tó is a thermal lake and pool and camp. We know it well from Land Rovering days. It needs some tidying up, but we like it. 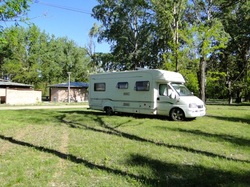 Saturday 7 May 2012
The story is on hold from here. Judit will lurk in Hungary with the family while Ian sorts out the silly driving licence photo. Gone are the days when they lasted for ever. One of our friends lives in France, he got himself a French Driving Licence which does last forever.