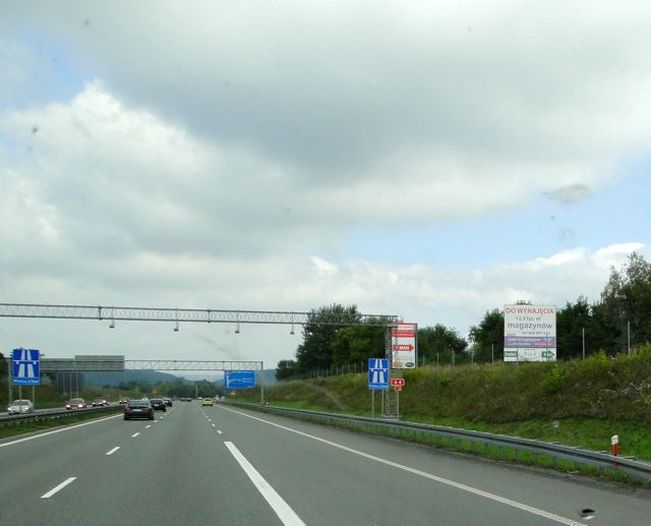 Gantries and "card" sign, under the A4 sign. It's placed on the entry slip road, when you are busy looking for traffic.
20 September 2013
We wanted to see Krakow. Everyone says it is very beautiful. But first we had to get there. We set the SatNav to not use motorways or toll roads. It should be good because we updated the maps in Hungary. But it became very worrying and confusing to see gantries over the road with detectors/cameras on them. We also noticed a very small sign at the side of the road looking to have an image of a credit card... the image is about that size. What does it mean?
Anyway we were on the road now and could not do anything about it and we stopped at Camp Smok, just outside Krakow.
The lady owner of this pleasant camp said that we should get a ViaToll Box because there were stories of people having to pay massive fines for not having one. She did not know where to get one or how to use one.
Next day we visited the city by bus. Buy tickets for the out and return journey. Each ticket can be used on all public transport for up to 2 hours.
To be fair the city is quite nice, with a big medieval square and a few narrow streets. It is packed with tourists and shops selling things you never knew you needed. Most prominent is amber. But it's not cheap.
Tomorrow we will buy a ViaToll Box. 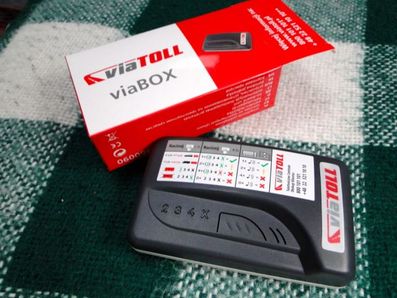 21 September 2013
We left Camp Smok with the intention of buying a Via Toll Box. After all the horror stories of people being trapped by the Police on what appears a normal road but without a Via Toll Box we thought it wise to invest. Any vehicle over 3.5 ton should have a Box because the detectors and the Police can catch you out. We have heard stories of people having to pay over £1,000 in fines (see Magbaz Travels).
The idea is that you buy a Box and pre-load it with money. Then when you go under said gantries it deducts the toll automatically. In theory, when you get to the border you can hand the box back and get the cash back for it, plus the unused amount left in the Box. The roads are shown on a website but we have seen detectors on other roads already.
The local filling station did not sell them and said that there is just one place in Krakow but they didn’t know where. They said it should be possible to get one on the motorway. Great!
Never mind, we went into town to visit the Palace and see if we could see any signs for ViaToll Boxes.
At the Palace there is parking purely for buses and an underground car park for cars. Motorhomes are not catered for. So forget the Palace. We set off for Auschwitz via the motorway.
At the first service area we could buy a Box but the staff and everyone else were quite confused and unsure what to do. The process went as follows:

On our way to Auschwitz we had to pay a “normal” toll at a “normal” toll booth. On our way the Box never bleeped once and we never saw a gantry, yet the road is marked as one of the Via Toll roads on the internet. Is it working? Should we try to find a centre where we can report the problem? There is a button and the figures 2,3,4,X may light up. Is this good?
To be continued.

As an aside, all the road signs in Slovakia looked like the printer had run out of vowels. In Poland all the signs looked like eye charts at the opticians. 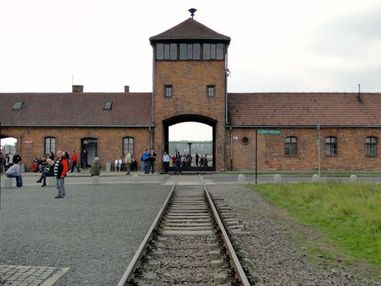 The gate to Auschwitz-Berkanau.
Amazing, unbelievable, horrible, terrifying but should be seen. We’ve all seen the appalling images on TV but to be there sends shivers down your spine and leaves you wondering what sort of people could do such things to other human beings. The whole organization was run like a very efficient business, just as if they were making crockery.
There are two sites to visit and both are free, plus there is a free bus to take you from one to the other. You should allow a minimum of a whole afternoon to visit both sites.
We parked at Auschwitz-Berkanau car park for 8PLN per hour for the first 4 hours and then free for the next 21 hours. Do the Poles have a 25 hour clock?
We used the car park as a Night Stop and we were the only ones there. A little bit spooky sleeping within 100 meters of the factory of death. 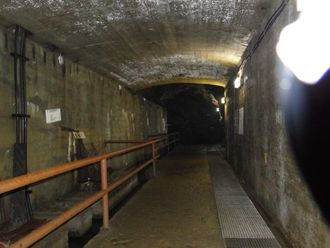 The finished part of the Walim tunnel.
22 September 2013
It was quite a long drive from Auschwitz and we never heard a beep from the box. Plus we had to pay at toll booths. The motorway is good quality but the minor roads are not and are quite narrow. However the countryside was pleasant and became more so as we approached the hilly area around Walim. We parked just outside the Nazi Tunnels and had a guided tour. It was interesting but would have been better if someone spoke English. Sadly the tunnels are unfinished so it is more like a walk around a mine. We stayed the night in the car park. 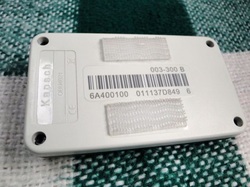 Back of ViaToll Box with self adhesive velcro.
23 September 2013
After a peaceful night we headed for the German border near Dresden. Our route was very pleasant through the forests until we got to the motorway. Once again, no indication that this was a ViaToll road, even though it is indicated on the Polish ViaToll website.
Take care at the border as there is no Polish “side”. So we went into the German “side” where there were lots of empty offices. Luckily a Ukrainian trucker spotted us carrying our box and directed us to the correct office. It is not clearly marked and the VIA part of the name is a white outline on a white wall. Once inside a bored looking lady wanted all the papers and the box. Ian had to sign two sheets of paper agreeing that we had NOT paid any tolls and we would get the money for that and the box returned to our bank accounts. We’ll let you know.
So after all that faffing around and time wasting we actually spent nothing other than at toll booths. Well done... and so they should be. 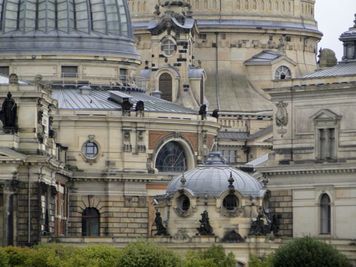 Once in Dresden we followed the GPS to a Stellplatz. It didn’t look right as it was a large hole in the ground, but there were a few vehicles parked. Not far away was the most amazing Tourist Information office (near the Frauenkirchen church). They had a massive counter manned by several people who spoke English. There were maps, videos and lots of goodies available. There we were told that it was not a Stellplatz and we may be clamped. But she gave us directions to another Stellplatz across the river. After a bit of messing around with one way streets we found the place and parked. See Night Stop section.
We were conveniently placed between two bridges across the Elbe and so we had a wander across and through the town centre. The city centre is very attractive and it is clear that a lot of time and money has been spent in renovation.
After a very pleasant walkabout we returned to Bessy for the night. 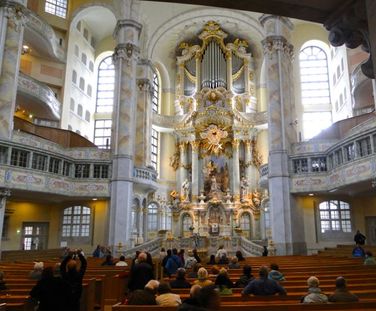 Frauenkirchen Church in Dresden.
24 September 2013
After a bit of shopping at LIDL we found the motorway and pointed to the West. On the way we stopped near Leipzig to check out three Stellplatz on our map. In brief they didn’t look like stellplatz so we drove on.
We did find a pleasant Stellplatz on the outskirts of Kassel and parked up for the night alongside half a dozen other motorhomes. 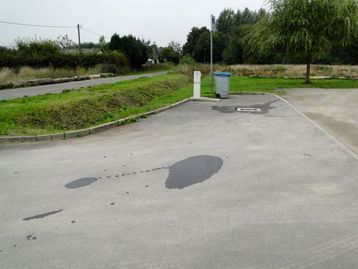 That is Bessy's gearbox oil.
25, 26, 27,28 September 2013
We drove just 20 meters to the dumping area, reversed back to the grey water hole and then saw the pool of oil in front of us. Could it really be ours?
A quick look underneath confirmed it was and it was coming from the gearbox. We moved away from the dump area and called the RAC.
The recovery man arrived after about 90 minutes and agreed it was gearbox and that we should not drive Bessy anywhere. A kind worker cleaning the Stellplatz towed us onto the street and soon Bessy was hoisted by her two front wheels on the back of the recovery truck. We were towed just a few kilometers to the services of Dürkop. This is a massive garage complex, with workshops for tall vehicles (us) cars and sale rooms. 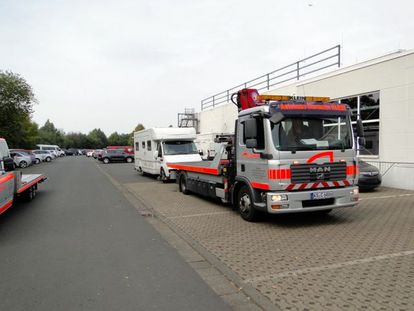 Recovered to Dürkop Services in Kassel.
This is when the image of Germany efficiency began to crumble. A young lady, Bianca, translated for us and was very helpful, but the garage was not. It took them 4 hours to enter us into the system. Then it was going home time so we had to wait another 20 hours before someone, Thomas, came to look at Bessy. We had slept in Bessy in the yard but it was very noisy from the wholesaler next door getting deliveries all night.
Anyway, Bessy was pushed in to the workshop with Ian struggling to steer, without power steering, onto the hoist. Up she went and Thomas diagnosed the problem in about two minutes. It seems there is a retaining ring holding the half shaft into the gearbox. The ring had broken and this allowed the half shaft to come out of the gearbox a little when we gave Bessy full lock. The reason for the ring breaking was because the “sealed for life” universal joints on the half shaft were stiff, presumably there was no grease in them.
So the garage ordered the correct parts as they were not in stock and we found a small hotel nearby. 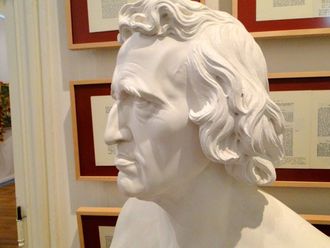 A Grimm brother for a grim few days.
Next day the package arrived but the wrong items were in the packing!
We would have to wait another day, so we went on the bus and explored Kassel. Quite nice really. We visited the Brothers Grimm museum, walked around town, visited the Orangery and had a pleasant sunny day. 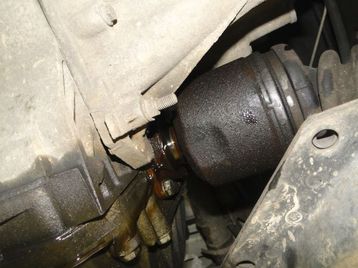 For the technically minded you can see how far out the half-shaft slides.
Next morning we did not rush to the garage but when we got there we found that Bessy would be ready after lunch. It was after lunch because nobody seems to rush around being efficient at Dürkop; they seem to like hiding round the back having a slow fag.
The hotel was called Motel One and the owner/manager was very pleasant and helpful. We slept in the hotel two nights but he kept the room free for us in case we had to stay longer.
Nearby was a giant truck stop with an excellent restaurant selling very good food at reasonable prices. We had breakfast and dinner there. Really good and can recommend it but it’s awkward to get to from the autobahn (N51° 16.275', E9° 31.551').
After picking up our bags and thanking the owner we headed west again; there was a feeling of “let’s just get home” in the air.
As it was we went all the way to Brugge. We’ve probably driven past it a hundred times so now was the opportunity to stop.