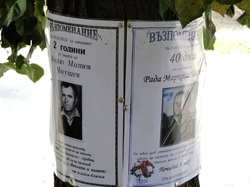 Notifying the death of a family member, Bisor, Bulgaria.
Our first full day in Bulgaria, so we walked around the village of Biser. A year ago one of the dams upriver burst and flooded the village. Twelve people died and lots of property was damaged.
The authorities did repair and rebuild some of the houses. However there is still a lot of EU money held somewhere that should be used on repairing the roads. Where it is nobody knows. Yet another lack of EU control. This time allowing continued suffering to innocent people. 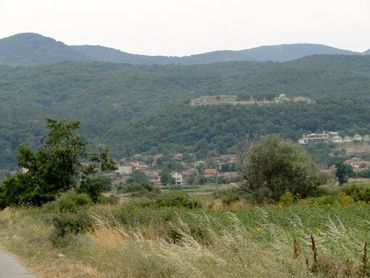 Mezek Castle, Southern Bulgaria.
Today we had another day out. First to Harmanli shopping for a few things we forgot to buy the other day. Then back South to Mezek. There is a fort on a hill that the EU and the authorities have renovated. It looks very good and there are some great views from the battlements on the hill. Our journey took us in a loop so we could see more of the countryside. It’s very green after spending so long in some parts of Turkey. 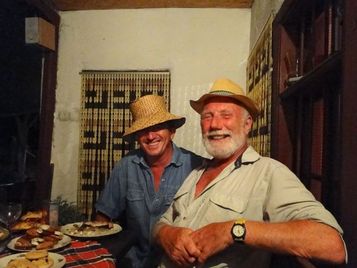 Nikolai and Ian after an excellent meal.
When in Alexandropoulis, Greece, we met some Bulgarian guys. They told us to visit them, so we did. We had pleasant drive North to the village of Opan, where Nikolai has a house.
We were very warmly greeted and it was a pleasure to meet Nikolai again, his wife Diana and son Denis. Denis is the one who speaks excellent English. The house is 100 years old and was owned by Nikolai’s family. Now he is slowly renovating the place but keeping the old character of it. There is a very large garden which Buck, the retriever, really enjoys parading up and down with his teddy bear in his mouth.
In the evening two Pit Bull pups broke into the garden and Buck soon told them who was boss. But we still had to get rid of them which was quite sad.
We slept in Bessy on the street outside. The village is getting a new road and it was full of trucks, graders and JCBs. Courtesy of the EU. Nikolai says he will put a sign at the end of the street saying “Ian’s Street”.
In the morning we were woken at 0700 (on Sunday) by one of the road workers. We had to move to let the grader past.
After a good breakfast Nikolai and family escorted us to Stara Zagora. The town is very pleasant with many museums, large parks,  and lots of shade trees. We had a good guided tour of the centre before we said goodbye to some nice new friends. 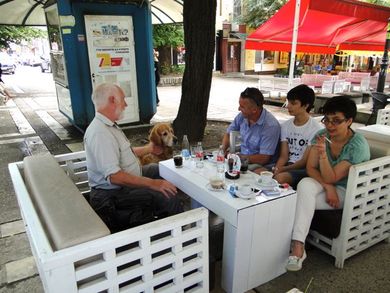 We took the new motorway from Stara Zagora to the coast. It is of excellent quality. But all good things come to an end and soon we were on normal Bulgarian roads again. The countryside is very nice with big fiels of sunflowers and very large vineyards. Luckily we were heading for the coast. The traffic returning after the weekend was horrendous. Just one massive queue for mile after mile.
The plan was to visit a campsite that is teaming up with Sakar Hills. The idea is to have six campsites around Bulgaria that will provide a quality experience.
Luckily we had the coordinates of the camp in Obzor or we would never have found it. There were no signs anywhere for the camp. In fact in our run up the Bulgarian coast we saw only three signs advertising camping. This is so stupid because there are campsites but it looks like they don’t want business.
Anyway, Camping Zora-Ob is quite pleasant but they have the world’s worst internet. Ian tried to watch the British Grand Prix with Filmon.com. Eventually he gave up and went to the camp restaurant, just up the road. It was just as bad there. In fact He had to sit at a certain table just to receive the signal. Finally he watched the last 10 laps on Bulgarian TV. Not a happy Bunny. 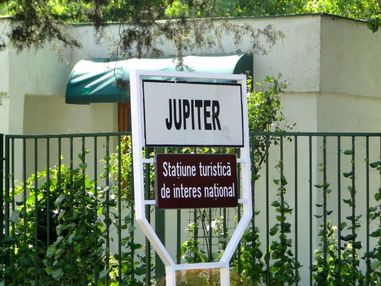 Just in case you do not believe we are staying on Jupiter.
We left Obzor fairly early and headed North for Romania. The journey was very difficult because of very high winds. In some places trees had been felled at the side of the road and the high winds had blown these trees onto the road.
The crossing from Bulgaria to Romania was painless. The young lady Customs Officer wanted a quick look inside Bessy and that was it. Plus we had to show our car papers of course.
Our map and Google Earth, showed five campsites at the first small town of Vama Veche. Not one of them was suitable for a motorhome so we drove on through a town called “2 Mai” towards Mangalia. Once again the map showed a campsite which was in the gypsie quarter of town. We certainly attracted a lot of stares as we negotiated the very bad roads. There may have been a campsite but we wanted better and drove back to town to buy the Vignette. They would not take Bulgarian Leva at the Service Station so we had to find an ATM and then pay with Romanian Lei. The vignette cost us £17.20. That’s a rip of because we’ve paid for the roads.
Luckily the SatNav has a list of Archies Campings and we found one in Saturn. Yes, really. North of Mangalia there is a purely holiday resort where different parts are called after the planets. Despite the silly names the place is pleasant enough and has some good campsites with good wifi.
In fact it was so good we stayed another night and tried to catch up on the website.