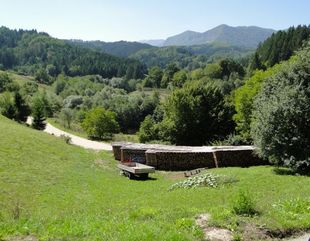 The SatNav was set to avoid tolls on our route to Postojna. It ignored our advice and took us on a normal road that turned out to cost us £1.50. Then we entered Slovenia. No one checked papers at either Border Post. Why then do we have to play the silly game of registering every night in Croatia? As far as the authorities know we are still in Croatia.
The route through Slovenia was beautiful and after 3 hours we arrived at our camp near Postojna. For some reason the SatNav took us down a forest track for about 3 kilometers until we came to a locked barrier to the camp. Judit walked to reception to get a key. While waiting for her a lady came from the camp and asked in her best Slovenian “Have you got a GPS?” Within a minute a car and caravan pulled up behind us. They also had a GPS!
However Judit returned with the key and all was well.
The camp is very pleasant being set in the middle of the forest. Lots of facilities such as a pool, washing machines, toilets, water, electricity and free WiFi near the restaurant. For some reason we can browse the internet but not download emails.
In the afternoon we visited the biggest show cave in Europe. It certainly deserves the title. Check the gallery for Slovenia. We entered on a small electric train with about 100 other passengers. The 10 minute journey was like something from Raiders of the Lost Arc. The driver was clearly in a hurry for something. Once inside we were guided through nearly 2 kilometers of passages and chambers before boarding the trains for the journey out. All told, it was overpowering. 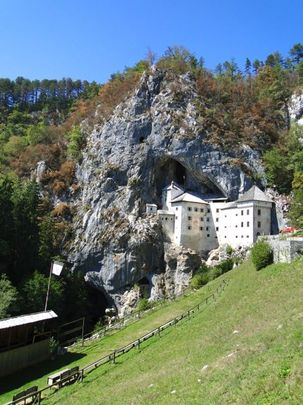 While in Croatia we had a slippery mud patch and a raised kerb to negotiate at one of the expensive campsites. From that moment the right front brake squealed a bit. I guessed we’d picked up a stone. However it got worse and this morning I jacked up Bessy to take the wheel off and have a look. The jack is a scissor jack and they normally have gears at the bottom to keep the whole lot vertical. Our jack does not have the gears and Bessy started wobbling so much I decided it was not safe to work next to 3.8 ton of motorhome.
The camp staff directed us to a garage which turned out to be the Slovenian “AA”. They were excellent and soon discovered that one of the pads had completely worn down.They changed the front pads and within 90 minutes we went on our way €100 lighter but much quieter.
That meant we could visit the castle at Predjama. What an amazing place. It is built into a cliff face and into a cave.We spent a good hour or more browsing around all the nooks and crannies. Check out the photos.
Then back to camp to sort out some washing (€5 a load). Incidentally, the weather is much cooler with the day starting at14°C and rising to 22°C. 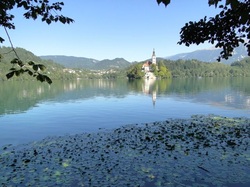 The unbelievably beautiful Bled lake.
Our destination was Bled, but the SatNav still wanted us to go on the forest track. We ignored it. The whole journey was very pleasant indeed. The roads were excellent except for 2 stretches which had been made from concrete slabs. Gedunk, gedunk, gedunk, etc.
The parts of Bled we have seen so far are beautiful. The countryside is green and lush with cows in fields. Normally in Hungary the poor things are kept in sheds all year round.
Our campsite is the only one in Bled. They have a simple pricing system based on the number of people. Nothing to do with motorhomes, electricity, WiFi, etc. Nice and simple and the internet is free. None of the nonsense, as in Croatia, of registering with the Police every night. I recall one of the Croatians telling us that they had to pay tourist tax if they ever slept away from home. Imagine visting your granny and having to pay a tax. What a load of Communist rubbish.
So far we are very impressed with Slovenia. It appears to be a well organised, affluent country. Not a bit like Central and Eastern Europe; more like Austria. 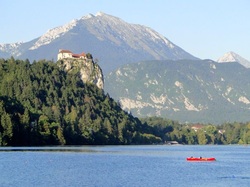 In the morning we went for a walk into the town of Bled. The lake is crystal clear and large fish are very easy to see. Every corner provided new and interesting vistas of the castle, church on the lake and mountains. In town we found a cash machine at last where we obtained some Euros. When we were ready to return we spotted one of those tourist “road trains” going our way and hopped on the back. When it stopped at the camp Ian qwent forward to pay the driver but he moved off so that saved €6.
A Hungarian Harley Davidson rider was just moving in opposite us and Ian gave him a hand with his tent and then we invited him for coffee. He came from Kaposvar and knows Vaszoly quite well.
After coffee Ian went to the restaurant to watch the Italian GP and Judit went for a walk to a view point. The signs were misleading and the forest was dark so she walked around the lake in the other direction. Meanwhile Ian enjoyed a Union beer. Not a bit like the lager we are used to it. It was much hoppier and very tasty. He also had a chat with the chef who gave him a vanilla slice (or Francia Krémes as Hungarians call them). It’s said to have been invented locally but the chef said the original recipe came from Hungary. 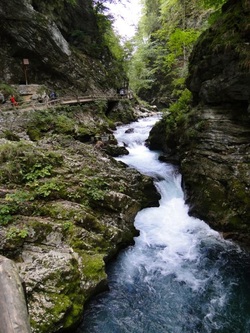 Vintgar Gorge. More photos in the gallery.
Although our bus leaves at 1010, we got up at 0630 for some strange reason. At that time the weather was breezy and drizzling. So it was time to wear a waterproof for the first time since February. We got the bus to Vintgar Gorge and then regretted wearing jackets as the day turned into a very humid 28°C.
Vintgar Gorge is “gorgeous”. The river carves it’s way through a very narrow gorge and there are several waterfalls. The route is along wooden platforms built intop the side of the gorge. This place is worth a visit.
We wrote to Giuseppe, our Italian friend, about visiting him on Saturday. His friendly response was immediate. Thanks Giuseppe. We will now make plans to work our way towards Udine.
In the afternoon we tried to work on the website but the WiFi is intermittent, but free. 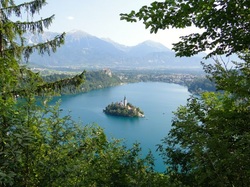 The classic view of Bled lake.
To keep us fit Judit decided we should see the lake from a classic viewpoint. It was certainly a struggle up there but the view was worth it. Going down a different route involved negotiating 87 steep steel steps and lots of narrow paths. In the afternoon we had a thunderstorm so we had an afternoon in. In the evening we invited Kornél for a meal. 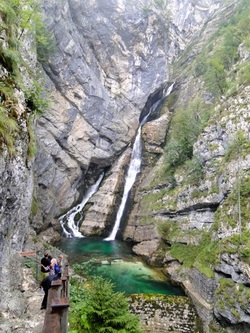 Slap Savica waterfalls.
Time to move on. We headed for Lake Bohinsko at the other end of the “Bled Valley”. The mountain scenery is amazing. First we went to a camp at the Western end of the lake but were disappointed with the facilities; maybe because it was raining heavy. So we moved on to find another camp, but first we called at Slap Savica. The Savica waterfall is quite a sight. The start altitude is 894 meters. There are actually 2 falls close to each other. The first is 78 meters tall and the other 25 meters. Apparently in Spring when there is more water around the falls start at the top of the cliff and fall 600 meters.
The new camp we chose is at Bohinj. There is grass everywhere and you can park anywhere. WiFi is avalaible all over the camp. By Slovenian standards this is a 4-star site.
One of our Dutch neighbours has a WiFi amplifier which he demonstrated for me. 50% of the camp antennae were medium output. With the amplifier all the 6 antennae were excellent, plus another 10 excellent signal from the local area. Must get one. By the way, all our dry sunny days have gone. Today it rained, and rained and rained. The forecast was for 30mm in this area. I believe it. 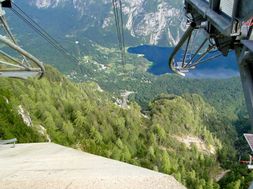 View from top of Vogel Gondola lift.
We had a fantastic day today after Thursday's rain. First we drove back to the lake and went on the Vogel cable car for a view of the Julian Alps. Wonderful views. The gondola really zips up the mountain for about 600 meters at 30 km per hour.
From there we headed for Kranjska Gora and on to Bohec. The SatNav wanted me to go via Italy and that seemed a bit strange so we took a shorter route. It was on the Russian Road as it is known. Before WW1 it was a track, but the Austro-Hungarian army made captured Russians widen it to a road. Although a narrow road, they did a good job. All told it had 50 hairpin bends with views of snow capped mountains. Amazing experience
Finally we arrived at Camp Polovnik at Bohec. Beautiful setting. Sadly we were at the wrong end of the camp to appreciate the free wifi.
Final thought before leaving Slovenia. Almost everywhere that tourists can be found there are free Portaloos. In the corner of a field, next to a cycle track, in a laybye. Amazing.