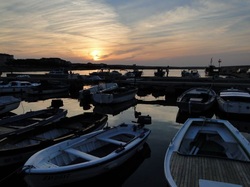 Up early for the drive to Croatia. But first we took a few photos of the area and changed a few Forint into Kuna. Little did we realize that Croatia would be expensive.
The weather was perfect and the Croatian motorway was in very good condition. The route was very pleasant with fantastic mountain views. But you have to take a ticket on entry and then hand your ticket over at a later toll booth. In total we paid 240 Kuna (about £25) to drive from Letenye in Hungary to a small village near Zadar in Croatia.
The campsite we were heading for is called Camping Planik. We’ve stopped there before with the Land Rover team. Not many level spots as it’s in a pine forest with no pitches, but 10 minutes walk from a small sea bathing area in the village.
The pricing structure is complex. The charge per person is €4.34. The charge for the motorhome is €7.42. To check in costs €1.00 per person. Tourist tax is €0.85 per person. Electricity costs €2.31 per day.In total it cost us €22.11 for one night. On top of all that the internet costs 10 Kuna (about £1.05) for 15 minutes!
The young lady at reception could not have been more pleasant and helpful but even that does not encourage me to stay long.
All the above was written when we were annoyed by the facts presented to us. Later, Ian had a long discussion with the owner and the story became clearer but no less annoying. The owner has spent a lot of money installing the wifi system. But the internet in this part of Croatia is rubbish; there is no cable internet. He told me that at home today he received an email of 150 kilobytes. It took 20 minutes to download. There is a similar problem at the campsite. Therefore if he offered free internet and several people used it the speed would be zero. He has tried satellite internet and that was no better.
I understand his problem. 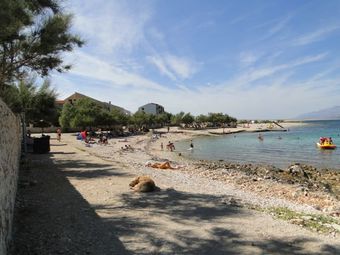 Today was beach day. Just a 10 minute walk down the hill and we were on the beach. Or should I say, next to the sea. The beach is made of crushed limestone rocks and is very sharp underfoot and just as uncomfortable to lie on. A large proportion of the stones resemble pyramids with 2 inch sides. However the sea was beautiful and clear and with the aid of mask, fins and snorkel it was possible to see several types of fish, sponges and sea cucumbers.
At Ian’s request we stopped the sunbathing around 1500 and bought a sausage at the local shop and changed obtained some Kuna from the ATM at the library. 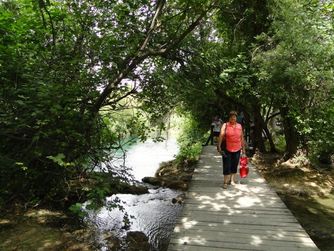 We took Bessy for a drive today. About 100 kilometers to the Krka National Park. The motorway seemed the best bet but we were disappointed again at the toll price of £5.50 for a one hour journey. It is little surprise that the motorways are almost empty and the minor roads are crowded.
However, the National Park was really good. We were taken about 4 km by bus (they do fight to get on a bus) down the valley sides. There are several lakes and islands forming waterfalls and cascades. It’s easier to follow the wooden walkways around the valley floor. At the lowest point is a wide open space, below a fairly large waterfall, with restaurants and bars. It was here that the enthusiastic went for a swim. Judit was enthusiastic and I could not be bothered taking my boots off and stand on one leg displaying my equipment while trying to put my shorts on.
It would appear that the Croatian physicist Tesla designed a water turbine system here and although it was the second one in the world to be built it was the first to supply hydroelectric power to the community.
On the way back to camp we stopped at two very enthusiastic campsites. The owners were out on the road touting for business. We had a look at both. They charged €12 a night with electricity and free wifi. But they were a not very attractive and about 5 kilometers from the sea.
We made our way back to camp on the main road. It was not bad at all. However it gave us chance to see villages devastated by the war. Burnt out houses, shelled houses, houses with bullet holes along the wall, soot over the windows from the fire inside. All this slaughter next door to decent, clean, tidy normal houses. People had lived together for years and suddenly turned against their neighbours.
The sad thing is that the bastards who did it are still walking the streets.
Judit bought a massive bag of tomatoes for £1 from a roadside stall. The lady wanted Judit to have the whole box but it was too much.
The highlight of the evening was when Ian went for a beer and a chat with the owner and receptionist. After one beer he found that he was surrounded by the staff who were celebrating the end of the season. Even better he was instructed to tuck in to chips and chicken along with the local sausage. Very pleasant.

Woken by massive raindrops on the roof. At last real rain. And then it turned into a thunderstorm that lasted all day.
Judit is making ciabatta bread from a packet mix. It looked more like Yorkshire pudding batter than my bread dough. But the final result did resemble bread. Naturally we stayed at home today and caught up with a bit of administration such as downloading photos, downloading GPS tracks and the like.

We were hungry for meat so after breakfast we had a trip into Zadar. The signs for LIDL, or the absence of them, managed to get us lost in Zadar for a while. But it’s a very nice place. We visited Zadar a couple of times with the Land Rover team. On return to camp, Judit went for a swim and Ian watched the Belgian Grand Prix. Yesterday’s storms had wiped out the camp satellite system. The camp manager, Andreas, went home and brought his own to camp just for me. We are warming to the campsite. 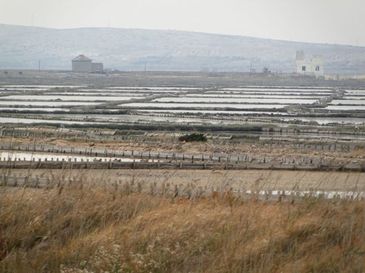 In the morning we drove to Pag island. There is a magnificent new bridge to the island with a spectacular view of a ruined fortress. After that the surroundings are bleak and rocky. Not a blade of grass until approaching Pag. The valley floor is covered in salt pans but they look derelict now. There is a salt factory so maybe there is a more modern way to make sea salt.
Pag is a pleasant small town with narrow streets and harbour front. After a walk around we headed back to camp, stopping at a cafe/taverna/restaurant selling spit roast lamb. Not having eaten decent lamb for many months we had to try it. We were not disappointed. The owner carved and chopped up about one kilo of meat, with chips and salad. Total price about £30. We don’t normally pay that much but the doggy bag will keep us going for another 2 days.
Back in Razanac we had a swim and returned to camp as a thunderstorm is threatening.
There are some good place names in Croatia such as Cres, Vis, Pag, Ston and Nin. Then they spoil things with places called Vrbnik or Krka. 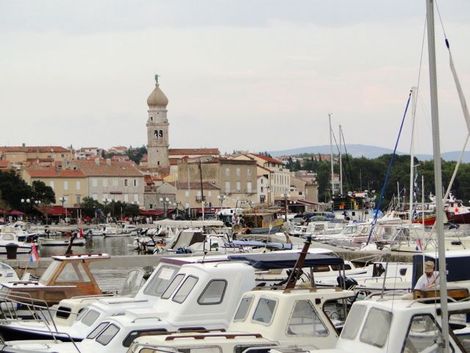 It should have been an early start but it wasn’t. We finally took to the road at 0930 and made our north up the coast road (avoiding motorways). Very pretty but also very twisty and “turny”. I just made a new word. Some of the islands  a few kilometers offshore were pure white rock and one looked very much like an iceberg. Another colour surprise was that the scenery looked like Autumn. Most of the trees had brown leaves probably from the verty long dry summer. In fact after yesterday’s rain the Razanac campsite was starting to turn green again.
During the morning the wind really picked up and, as well as feeling it, the sea became much choppier. Maybe this is the famous wind of the region similar to the scirocco and the mistral.
We thought that Istria would be a good destination but soon got tired of the driving so we found a bridge that went to Krk. Sadly we had to pay £4 to cross it. The road through the island has lovely corners. They are what I call natural curves and it was a pleasure to drive on them. In fact most of the roads in Croatia have been really good. Much better than Hungarian roads.
Finding a campsite was a pain. We wanted to be next to the sea so we headed for one campsite (FKK) to be told it was for naturists only. Not wishing to embarass the other men, Ian decided we should move on. The next camp was on the beach near Stara Baska, but it was like a giant car park at a rally cross meeting. Rough ground, no trees and £8 a night dearer than last camp. Plus the internet was very expensive admitted the man at reception.
Rip-off. So we found an ACSI camp in Krk called Bor Autocamp.
This campsite is very pleasant and well run. It’s a bit of a trek into town and more of a trudge back up the hill. However it has everything that one needs in a camp. Sadly the starting price for internet is €2.00 and then you have to sit on a bench outside reception to use it.
We’ve been spoilt in Greece. 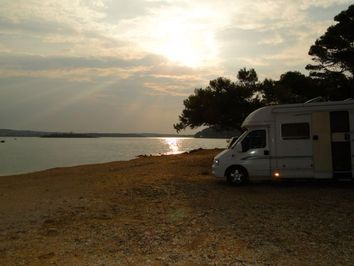 From Krk we made our way back to the mainland, looking for a postbox for James’s card and an ATM for some cash. We found neither on the route to Pula.
Our journey took us through Rijeka; which was an adventure. To avoid motorways, and their charges, we followed a mountain route, climbing 3000 feet through a national park. There were as many hairpins as you’d find at a hairdressing competition. There were very few places to pull off the road. In the end we found a rough patch of ground near Labin where we made our lunch and had a break after three and a half hours intense driving.
The next challenge was Pula; another big city. We headed for Camping Village Stoja. That’s when we began to feel that Croatia is a rip off. They are ACSI registered but the low season for them starts in 2 weeks time. Price for parking on their grass would be €32 a night. Extra charges for everything else. We moved on.
The next place we tried was Camping Village Indije. Cheaper at €30 per night, but the minimum stay was 2 nights. A German gentleman overheard our complaints about prices and agreed. He has been coming to the area for years with a boat. Now he must pay €5 a night just to have his boat in the sea. Goodbye.
After messing around for another hour we found some Germans parked on some rough ground next to an inlet. They camped here the night before and would stay tonight. That’s our plan. So we walked across a “bridge” to the village to collect a couple of beers and some eggs and butter in the pouring rain.
Ian had a good long chat with an American ex-soldier who lives in Germany. It must have been a good chat because he was there for more than an hour.