Our pitch at Camping Finikes 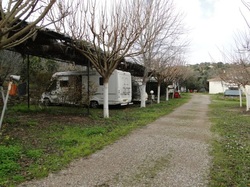 We made a short video of the campsite to give you a better idea of our circumstances. Someone at UMG (Universal Music Group) is upset with the music; saying it belongs to Berlin Philharmonic. Not true.
Here is our pitch. It's very strange to us to see grass and flowers. When we were here 3 years ago the whole area was just sand and gravel because of the heat. We are still under the palm leaf sunshades and Rod will have to replace all the leaves with fresh ones before the season starts. 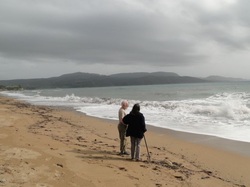 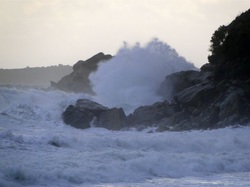 6 February 2012
Of course our little taste of good weather could not last. Today the weather turned and we have had 30 mph wind with gusts. On top of that we had thunderstorms the whole afternoon. The local village streets were flooded and the sea was crashing up the beach and into restaurants and shops.
Our friends Barry and Margaret took us for a ride around the area in a car they had rented. The local area looks really pretty with snow covered mountains in the distance, quaint Greek villages with very narrow streets. The little tour gave us an idea of the areas we can go to with Bessy.
When we got back to the campsite there was a mild panic going on. There is a small shop and a restaurant in the campsite (closed for winter) with a covered seating area outside. The strong winds have removed most of the roofing felt. 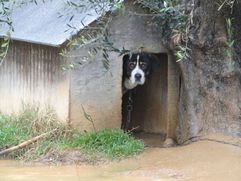 Aristotle the camp guard dog shelters from the rain.
_One small highlight yesterday was to peep out of our window and see the camp guard dog running around. He is called Ari; short for Aristotle. Normally the poor beast is chained up and looks fierce. In reality he is a big softy. Rod and I accompanied by Maisy, a 10 year old girl from a Brit family, chased after him.
It was Maisy who caught him and we took him for a stroll and chained him up again. While in the guard dog area Rod introduced me to the five chickens. Once again it was Maisy who found the new nesting spot complete with 11 eggs. Very nice and definitely free range. Oh what an exciting life we lead. 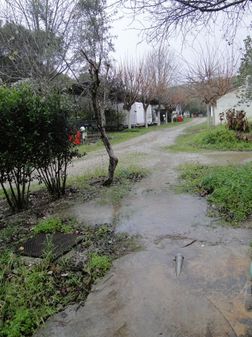 Rain is a rarity so the campsite has no drains
7&8 February 2012
The local weather has been atrocious with heavy rain and hail. So far, in the Peloponnese three people have died as a result of the bad weather. Fortunately our area has only suffered from the rain and thunderstorms. The camspite is certainly soggy and, "I'm going to the bog", should be taken literally.
Barry and Margaret took us for an outing yesterday to the supermarkets in Messini, The supermarkets lie alongside Kalamata airport. We visited LIDLE, Carrefour and a Greek supermarket. For those in the know, we found only 2 tins of beans and 4 tins of peas.
We were able to forget about the weather in the evening when we held our first "party". 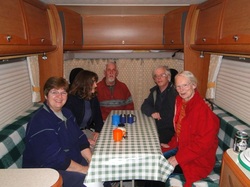 So fare our social life is better than back in St Albans. All our neighbours speak to us; and we even had a bit of a gathering in Bessy. Luckily we can accommodate six people around our table. Judit made the guests a warming paprikas krumpli and Shelagh and Ian brought a bottle of Hungarian wine. Barry and Margaret brought along a delicious date and walnut cake.
One evening we went to the Kastro Taverna in Methoni for our first real Greek meal. Present were Barry and Margaret, Rose and Alf and ourselves. Rose and Alf are old friends of Barry and Margaret who now live in Greece. It seems the best way to order is to ask the owner what is available. 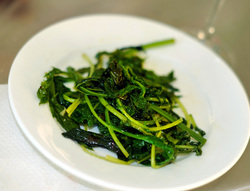 Winter greens
Our choice included winter greens foraged by old ladies in the fields (look away those who have a pet rabbit) and rabbit stifado. The latter is a kind of stew with the saddle of the rabbit and lots of tiny onions, in this case, in a tomato herby sauce. Judit chose a delicious lamb stifado.
We could have had spaghetti or chips with our meals.
Another favourite was pork chop which as far as I could understand is marinated in olive oil, lemon juice, red wine vinegar, lemon zest, oregano, garlic, and black pepper. 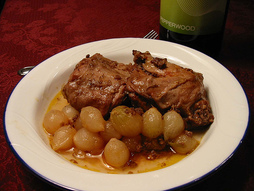 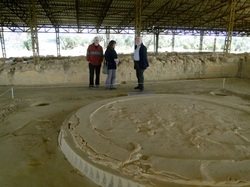 The hearth in the throne room of Nestor's Palace.
Sunday 12 February 2012
Barry and Margaret took us for an outing today to Nestor's Palace.
The Palace of Nestor consists of four chief buildings and dates from between 1300 and 1200 BC.
The palace was a two-storey building with store rooms, workshops, baths, light wells, reception rooms and a sewage system. The site is the most well preserved Mycenaean Greek palace discovered.
A large number of earthenware vessels and gold artifacts were discovered at the site which are exhibited at the Archeological Museum in the nearby village of Chora. 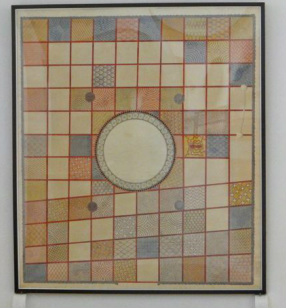 The unusual patterned floor.
Although the palace is mainly 2-dimensional one or two features caught my eye.
For example the floor was covered in a pattern that started with square tiles and ended up completely out of square... why?
Surely somebody would have noticed the spotty little Herbert of a tiler making an almighty .....
The throne was placed at the 3-00 o'clock position and faced towards the circular hearth. Between the throne and the hearth is an image of a squid. But the literature calls it an octopus. Why? 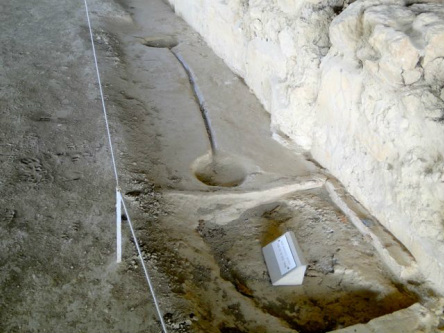 Two bowls and a narrow trough.
The other unusual feature was a small narrow channel, only about 3 cm wide and 2 cm deep, linking two hollows about the size of large soup bowls sited next to the throne.
The throne position is marked with a label and the channel and two bowls are to its right.
Sadly there was no information given about these intriguing features.
Any ideas?
We meandered through the narrow roads and closely packed villages of the Messinia district. Everywhere were wild flowers in abundance. Almond trees were in blossom and the sun shone brightly.
From several vantage points we could look over Kalamata towards the Taigetos mountains covered in snow. Wild sage grew along the roadsides and the occasional dog, goat or cow took our attention.
On the return route we passed through Petalidi and after a walk along the storm damaged seafront we had coffee and cakes. A perfect end to a lovely sunny day out.
Check out the Gallery for more photos. 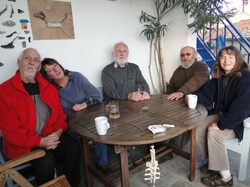 Barry, Rosy, Ian, Alf and Margaret.
17 February 2012
We have been socialising a bit more this week. Barry and Margaret took us out once again, for which we thank them. On Wednesday we went to the village of Lachanada to visit Rosy and Alf. Great food and beer and a lovely walk around their village. Rosy and Alf have great views over Finukunda from the roof of their traditional Greek house.
On Friday we travelled up in the hills to Mystraki where John and Lizzy live in splendid isolation. Their house is on the edge of Mystraki and they have no mains electricity or water, but it does not stop them having a full life. Again, great food and drink. Once again they have fantastic views. This time looking towards the Mani with their snow covered mountains. Look at the gallery for more pictures. 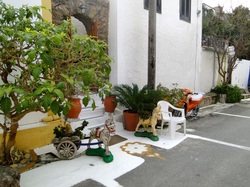 Outside houses. This had the most donkeys.
19 February 2012
Trip out with Barry and Margaret again. This time to Koroni. A very pretty little town with many signs warning motorhomers not to enter the town. Koroni has narrow streets to put the fear of God into any motorhomers. Our main aim was to visit the castle and the convent within it. Very nice indeed.
There are more pictures of this lovely place in the gallery. 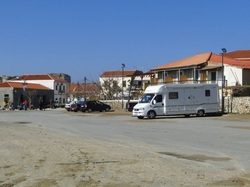 24 February 2012
After standing for a couple of weeks it was time to take Bessy for a run. A good job too because the brakes were already beginning to seize up. We drove just a few miles to Methoni where we filled up with diesel at around £1.40 a litre. Methoni is very pretty with a large castle built by the Venetians to watch over their trading routes. See photos in Gallery. 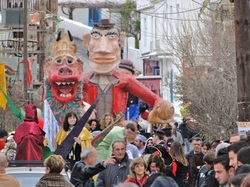 27 February 2012
It's Carnival time. Just before Lent, as in the UK, people get rid of all the fat and good food for some strange reason. In Greece they celebrate this day with a procession of Carnival floats trundling down the streets, kids and adults wearing fun costumes, fireworks, streamers and the like. The highlight is a play where a man dressed as a woman attempts to marry a woman dressed as a .... oh well, you get the idea. Lots of fun and frolics. Luckily the thunderstorms and the heavy rain arrived as the show was finishing. HIGHLIGHT... Rose received a text telling her that she had just got a new baby grand daughter.
More pics in the gallery. 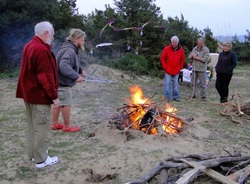 Ian, Graham, Peter,Brian and Carol.
3 March 2012
This was Judit's birthday and we celebrated at a local taverna. To be honest Judit chose the best meal... souvlaki. The fish in batter was very thin salt cod and the meatball was about 6 inches across and 1 inch thick and had the texture of pate. Better for baby food.
Next day was a good party. It was Graham's birthday (one of the campers) and his family did him proud with a fire on the beach, lanterns in the trees and lots of liquid refreshment.