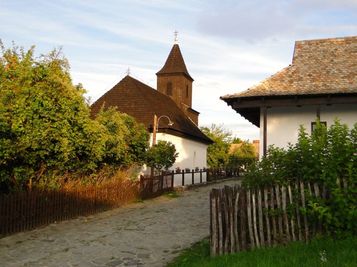 Hollokö, a World Heritage site.
16 September 2013
After 2 months in Hungary we began our travels again. During our stay we had the damage repaired, the fridge gas system repaired and the bonnet painted. Then to make matters even more expensive the camera packed up. It seems the iris was not opening and that entailed going to the SONY repair people and having the whole optics changed.
The highlight of our stay was a visit from Jo. Sadly it was far too short.
So, on our way again we picked up the camera in Budapest and headed NE towards Holloko. We knew there was a good car park but when we got there it was very sloping so we decided to see if the Buddhists had a place for us. We know the road quite well because a client of ours had an office in the area and we had seen the Buddhist Stoupa on the hillside. Sure enough there was a decent car park and we stayed the night there. 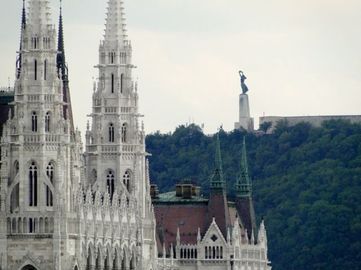 Contradiction. Parliament and Statue of Liberty.
Hungarian government has gone mad
Hungary has just introduced a system similar to Via Toll but thankfully it is for HGVs. It is causing a lot of concern for truck owners and operators.
The second strange thing is that the government under Viktor Orban (self styled saviour of the Hungarian people) have banned the sale of tobacco products, except in government owned National Tobacco Shops.
To have a shop the sales of tobacco must account for 83% of your business. Naturally this rules out most places, including filling stations. Plus there must be a certain number of people living in the area. Strange, but true.
The National Tobacco Shops are said to be a non-profit organization but cigarettes and cigars cost just the same as before. Where is the profit going to?
It is also said that most of the outlets are going to Orban’s friends.
Be that as it may, within one month of the system starting more than 250 outlets are going bankrupt because they cannot make a living selling only tobacco.
The shops are very discreet and have opaque windows and no one may enter under the age of 18. Probably because nobody can see in there has been a spate of robberies. There has also been a massive increase in tobacco smuggling from more enlightened and less dictatorial countries.
What a surprise
The ruling Fidesz party has gathered massive support for the government’s scheme to cut household energy bills the government’s public relations director told a press conference. More than 2.5 million people signing petition sheets in favour of the measures. What a surprise! But no-one asked us.
Being homeless is a criminal offence!
Hungarian parliament passed a law which will ban the homeless in streets and public areas, and in fact declaring rough sleeping unlawful.
A similar law was already passed last year, declaring homeless people outlaws and punishing them with prison sentences, up to 75 days, or fines of up to HUF 150,000. The new law, which is supposed to protect “public order, security, health, and cultural value”, gives the power to local authorities to designate areas as out-of-bounds for homeless people, as well as evict people living in huts or shacks.  The new law will apply the same sanctions, such as fines, imprisonment or community service.
Prime Minister Viktor Orban, in a statement released on Monday evening, claimed that this new law is “primarily in the interest of homeless people” even though many organizations beg to differ.
Students beware
On 3 October A new dress code imposed by Kaposvar university in southern Hungary prompted students to strip down to their underwear in protest. According to the new code, women will have to wear long skirts or trousers and a blouse and jacket, while avoiding low neck-lines, heavy make-up and inappropriate fashion accessories.
Flip-flops are banned, as are unkempt hair and fingernails. 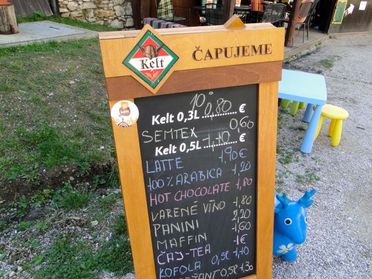 So this is where terrorists get the stuff; and only 60 cents.
17 September 2013
We were woken by quite heavy rain around 0630 so we had a leisurely breakfast and left around 0930. Salgotarjan was on our route and they had a TESCO and a filling station so we got rid of some of our Forints on bread and diesel. The road north from the M3 motorway to Salgotarjan was pretty bad and even the sections paid for by the EU were beginning to fall apart.
The border crossing was open and unmanned so entry to Slovakia was easy... and the roads were better once we crossed over.
Sadly the weather was no better and it rained heavily all day. When we climbed a pass we were in cloud so there were no pleasant views at all. Strangely the villages we passed through still had loudspeakers on the lamp posts. Other ex-Communist countries seem to have got rid of them.
We became a bit fed up with the cold and rain so headed for the “best” campsite in Slovakia. Not having tried any others, it seems to be more than OK.  The problem is that the site is all grass and a little sloping so we had a struggle to get established because of wheel spin on the wet grass and mud. Hopefully we can get out OK. But we have electric and wifi. However the signal was intermittent and eventually packed in altogether. Probably the wet weather is having an effect.
We put the gas heater on today for the first time since last November. It soon put the temperature back up to bearable. Sadly our fan heater has died and therefore we can’t use the camp electricity to keep us warm.

A castle on a hill 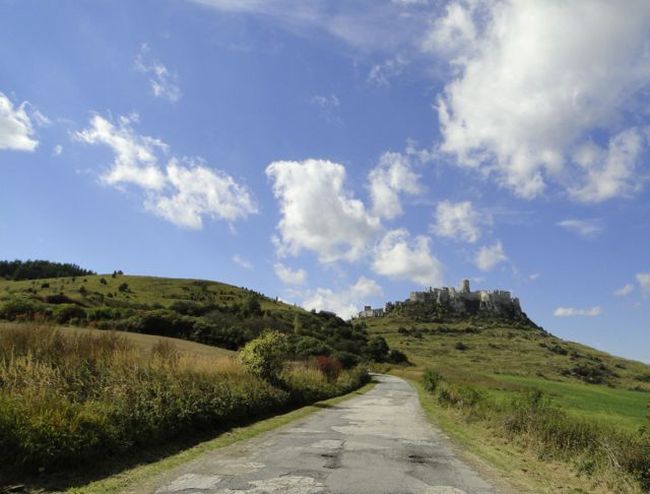 18 September 2013
Today we woke to lovely sunshine, but it was cold... 7°C. That meant using the gas heating again. Fortunately the ground had dried out a little and we had an easy exit from the camp. Our route took us over quite a few high roads through forests past Tisovec and Muran. We saw a lovely arrangement of weekend houses just outside Hranovnica and then on to Poprad where we topped up the LPG in case we need to use the heating again.
The favoured roofing material in this part of Slovakia seems to be galvanized steel sheets.
From Poprad we drove past Levoca to visit the Spisky castle. It really is an amazing sight in the perfect location. We spent a good 90 minutes roaming around. Judit borrowed an Audio Guide and that probably slowed us down!
We had wanted to spend the night in the castle car park but there were lots of sign prohibiting just about everything including: guns, tents, motorhomes and parachutes... really. So we made our way back to Levoca where Archies Camping had a site just north of the town at Levoca Dolina. There we met Norbert and Siske from the Berlin area. They also did not know if the camp was officially open but we set up shop and here we are. 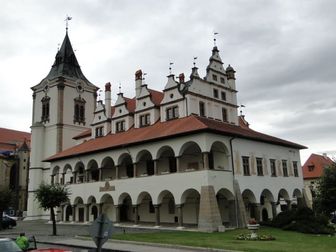 Levoca Town Hall.
19 September 2013
Levoca is surrounded by defensive city walls and the interior is medieval. We found out that it is possible to drive into the old town and park quite easily for about €1 an hour. Sadly it was raining when we arrived so we entered three different museums. The Town Hall is probably the best.
The ancient church which has an enormous altar is under renovation, as is a large part of the town. The church accepts a payment of €2 per person but only opens at 10-30 and 11-30. It is a bit of a nuisance to be honest as a walk around the gloomy interior takes about 10 minutes. Yes, the statues are well made. Yes, there are paintings on the wall. But the famous altar is covered with a large photograph of the altar which is the main reason for entering the church.
We, and several other people, had to ask the guide to unlock the church door so that we could leave.
After church we called at LIDL and had lunch in the car park. Then it was on to a place Ian Manzie said could be a good Night Stop. It’s a car park at the bottom of a ski lift at Tatranska Lomnica.
The site is very well developed and the views of the 10,000 foot mountains are magnificent. We enjoyed watching the helicopter working on the slopes and then landing near where we are parked. Maybe we’ll be blown away in the morning when they take off. 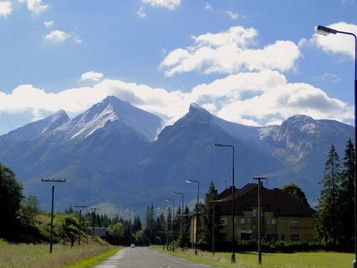 We were not blown away because the helicopter remained unused while we were there. So after a leisurely breakfast  we had a very pleasant ride through the high Tatras towards the Polish border. Very beautiful.